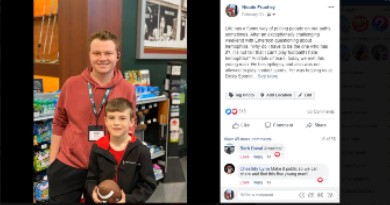 Sometimes the biggest frustrations and challenges in life can be a little better if you know you’re not alone, right? Just knowing that someone else is dealing with some of the same stuff that you’re dealing with can ease the stress a little. I think that’s especially true with kids, but takes someone who’s willing to first of all notice, and second of all, be vulnerable enough to share their own experience.

I was sent today’s Good Stuff story by my friend Mandy, and I thought it was a perfect example of that. It comes from a social media post by her friend Nichole Fruchey. She’d been having a pretty challenging day, but she had an experience that made it quite a bit better. 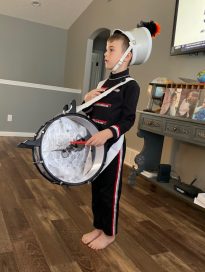 Nichole’s son Emerson is 6 years old which is the BEST age, and he’s a big Ohio State fan, loves the Cleveland Browns just like his dad, and he really wants to play football, but he can’t. Emerson has Hemophilia, which a bleeding disorder, and contact sports could be life threatening for him. That’s really hard for him sometimes, and the other day while Nichole and Emerson where doing some shopping at Dick’s Sporting Goods, it boiled over. Lots of tears, asking why do I have to be the one who has this, it’s not fair, I hate hemophilia.. it was an exceptionally challenging weekend.

But then, a young man who was working at Dick’s noticed Emerson. He got down on his knees to talk with him… and he explained that HE has epilepsy, and also can’t play contact sports. They decided to talk about all the things they have in common, and the young man, Dylan from Arlington, explained all of the things that Emerson CAN do, like play two hand tap football outside with his friends, basketball, baseball, and play music. Dylan answered any questions that Emerson had, and Nichole says she was in tears through it all. She says it was EXACTLY what Emerson needed to hear, and it started with a common limitation and Dylan turned it into a great moment of encouragement for her passionate, inquisitive 6 year old.

She ended her post with this: “Being a parent is hard, no matter what, but there are some really good people in the world who make it a little easier.”

She goes on to say “…if anyone knows Dylan, from Arlington, who works at Dick’s Sporting Goods, I’d really like to know who his parents are because they’ve raised a kind, caring, and thoughtful young man.”

“The Good Stuff” airs each weekday morning at 7:50am with Big Dave, and it’s always presented by LaRiche Toyota Subaru, on the corner next to Best Buy in Findlay, proudly invested in your community.