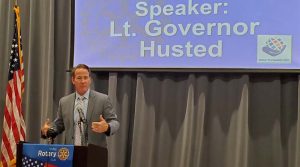 Ohio Lieutenant Governor Jon Husted visited Findlay on Monday to speak to the Noon Rotary Club. His remarks highlighted the improvements Ohio has made in drawing business into the state. Husted noted that the state has added nearly 600-million in new payroll as jobs have come to the state with businesses as diverse as Google, BarkBox, Bitwise, Morgan Stanley, and Peleton. Overall, he said, the state has drawn more than 8-thousand new jobs spread among 27 companies.